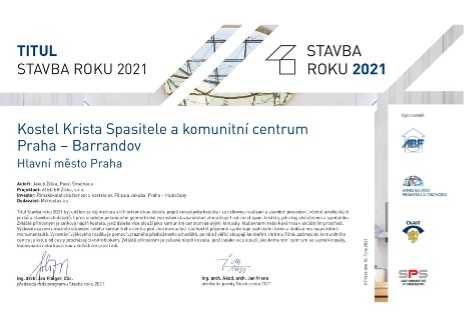 A LIFE OF LIGHT AMONG THE SHADOWS OF APARTMENT BUILDINGS

On the edge of Barrandov, where the hillside slopes down towards Klukovice towards the Prokop Valley, a new church has recently been built. The Church of Christ the Saviour. Despite its modern, smooth rectangular shapes and the materials that shape it, the inspiration and concept of its architecture goes deep into the past and thus combines the beauty of tradition and the present.

From the moment we stand in front of its tower at the foot of the staircase, it impresses us with its glowing whiteness and light among the nearby apartment buildings. The wide staircase and the adjacent space connected to the Kristian café invite passers-by to stop and sit. It’s a lovely place for meetings and a beautiful new landmark.

If we accept the invitation, which the retreating main portal invites us to do, we will pass through the main glass doors into the church’s magnificent light-filled nave. From the very first moment, we are captivated by the reason that makes this church so different from others. It is the LIGHT.

We are standing in the main wide church nave built in the shape of a cross with a wide semicircular apse. Inside, the whole church impresses with its purity and whiteness, the smoothness of the walls following the width of the light floor paved with golden granite, and then the steps ascending to the white marble chancel. Overhead, at the point of intersection, is a high-rimmed golden ring of glass, its golden surface creating a luminous golden-blue ripple around the 11-metre-high walls. The glass in the ring is carried by a stainless steel suspension structure that uses seemingly subtle struts and rods to keep the glass level and prevent the entire system from sagging.

Around the solstice, the sun penetrates this glass ring so directly into the church that during the day the light shifts to another, perhaps the most important symbol of the church, the cross. It is 5.75 metres high, made entirely of glass with a central stainless steel crossing. It is made of nine layers of 19mm thick tempered glass glued together.  The colour of the glass is greenish to stand out against the white background. Light penetrating the cross casts oblique coloured shadows on its surroundings, conjuring beautiful patterns underneath and behind it, transforming as the rays’ impact progresses. If you’re lucky, for a few fleeting moments during the day you’ll see a rainbow of light falling directly on the cross.

Another significant light feature is the stained glass window on the south wall depicting a procession of angels walking into the church. The panes of corrugated bubble glass encased in classical leaded glass change their colours from orange, to yellow, to clear. The stained glass is complemented by onyx elements in the faces of the angels and in the hems of their dresses. Next to the stained glass, the Virgin Mary descends to us on marble steps from a height of about 2.5 metres. Below her is a granite container for sand covered with water, in which candles are stuck to give strength to our prayers.

The layout of the church’s main furnishings follows the tradition liturgically, but at the same time is contemporary and modern in its simplicity and conception. In the centre, at the front of the chancel, an altar in the shape of a cradle made of beautiful Greek marble with golden veining stands on a foot of three wide golden cylinders. To the right in front of it, on the steps to the chancel, is an ambo on two narrow marble columns, which is golden in the shape of an open book. To the left of the chancel is a baptismal font built entirely of marble on a wide foot of a single cylinder, with a gilded cradle for holy water dug into its surface.

In the back rounded part of the chancel, through which we would pass into the sacristy, stands a tall cylindrical chapel of aluminium. When we dare to enter it, it surprises us with its fragility. Even with its solidity, it looks like lace, whose geometrically helically regular horizontal cross-sections, travelling from the right side from its entrance from the ground to the top, stop short of the triangle of solid smooth wall allowing people privacy and prayer in the chapel and protecting them from the gaze of other churchgoers.

The sanctuary, prominently placed next to the entrance to the chapel, is set on a marble rectangular base from which a carved shroud gracefully flows. The shrine is in the shape of a golden block with a recessed red glass cross as seen from the chapel. Above the tabernacle hovers a red eternal light in the shape of a bowl, again resembling a cradle from the side.

In the future, we can look forward to a bench that should complement the chapel furnishings with a place suitable for rest and contemplation. Also in the church, the Easter candlestick, the Stations of the Cross, the organ in the choir and the bell chimes in the tower.

The church is also worth pausing in the evening, which gives full play to its elaborate harmonious moods of electric lighting. The church has separate types of lighting for the different occasions that take place in it. It is different for a weekday Mass, different for a solemn one, differently lit for a concert, differently for an adoration, and differently just for the night atmosphere when the glass cross is lit separately. Beautiful are the cylindrical or clear glass lights floating several metres above the heads of the visitors, their texture making spider webs and bubbles in the glass like a small universe of light.

But the main element of the church’s lighting is natural daylight. It shapes its atmosphere and sculpts the moods of the visitors through the play and harmony of its tones and undertones, which travel along the walls of the church and change with the moods of the weather and the time of day, and change notably with the differences of the seasons. Thus the church, through its changes, acts as a living and speaking environment that affects people through the spirit imprinted by art and architecture on our world…